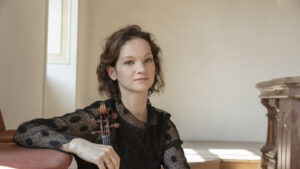 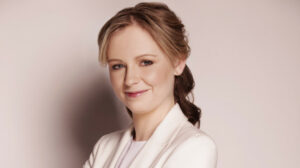 This was the third and final concert of the Immerse series, programmed and timed to attract a family audience. And some kids attended, although they were quite hard to spot. It’s not every parent or grand-parent who thinks to bring the smalls to an NZSO concert, and not every child who has the patience to sit still for more than 40 minutes at a stretch. That was a great pity, because the programme was delightful. Even people whose short attention span is in line with their height would have found the music enjoyable to listen to.

Conductor Gemma New dispensed with formalities and opened the concert with a short talk about the music – specifically the plot of the programme for each piece – explaining that all of the music had been inspired by fairy tales and stories. (The concert title asserted that the  scarlet thread holding all the works together was love stories with happy endings, but this notion probably sounded much more convincing in the marketing department than it did in real life.) I was scrambling to keep up with New’s description of the Mother Goose  movements, but we all enjoyed the characterisation of Pat Barry (clarinet) as Beauty and someone called Sam on contrabassoon (David Angus seemed to be away) as the Beast.

Ravel’s Mother Goose Suite is, as I am sure you know, full of delicious colours and textures, with lovely melodies and many exquisite details. New is nothing if not a stickler for detail, so it was all laid out in front of us. Last night I felt that this is the best the NZSO has played in more than a decade. I had the same sensation today; except that this music is full of joy, and moves with ease and grace. All that complexity and emotional challenge had gone with last night’s wind and rain. The afternoon was sunny with a promise of spring, and so was the NZSO’s playing.

Once again, the higher winds and percussion sections were kept busy. There was glorious playing from Robert Orr (oboe) and Bridget Douglas (flute), and delicious textures in the percussion, with xylophone, tam tam, triangle, and tubular bells. Larry Reece’s timpani playing is always a delight, being so precisely placed right on the very front of the beat, but the whole team sounded great on the ear. Carolyn Mills’ dry, percussive harp sound cut through the thick textures. At times the warmth of the string sound could almost have been Elgar.  Once or twice the cut-offs weren’t quite as clean as they had been last night, and I wondered about New’s gestures – too expansive? But the Suite was over far too quickly. I could have listened to it again.

The stage was reset for the Chausson and there was a distinct buzz of excitement in the audience. We would hear the remarkable Hilary Hahn one last time. Indeed, she walked on stage to loud cheering.

The author of the programme notes seemed puzzled by Chausson’s small output, but it is easily explained: he died at the age of 44 in a cycling accident. Had his brakes been more reliable, his name would certainly rival those of Debussy and Ravel today. His Poème was written for Eugène Ysaÿe, who had asked him for a concerto. Chausson thought that was too big an ask, and opted for something shorter, in one movement. It is nonetheless extremely beautiful, and Hahn was doing the cadenza full justice… until she stopped. She laughed, restarted, and carried on. The audience was happy. Then she stopped playing again in about the same place. It seemed that she had got lost navigating the complexities of the cadenza. She took a moment, said ‘I feel like the Cirque de Soleil’, and started that knotty passage again. As violin teacher Lynley Culliford commented in the interval, ‘It was such a human moment. So good for our kids to see.’

The audience went wild, of course. Several curtain calls, and on the third Hahn came out with her violin and, just as she had done last night, played a movement from another of Bach’s partitas for solo violin (perhaps the second movement of the G minor partita?). Her Bach is extraordinary: intimate and tender, delicate, and very moving. Hahn says that she has played a piece for solo violin by Bach every day since she was eight:

Bach is, for me, the touchstone that keeps my playing honest. Keeping the intonation pure in double stops, bringing out the various voices where the phrasing requires it, crossing the strings so that there are not inadvertent accents, presenting the structure in such a way that it’s clear to the listener without being pedantic – one can’t fake things in Bach, and if one gets all of them to work, the music sings in the most wonderful way.

If that is what it takes, we should all play Bach daily, and insist that our children do so too.

The last work in the concert was Rimsky-Korsakov’s Scheherazade. ‘The Sultan was angry,’ Gemma New began. ‘He didn’t trust anyone.’ She characterised the four movements as follows: the adventures of Sinbad’s ship; adventures on land; all the love stories in the world; all the festivals and parties. By this time, I felt as though I had used up all my superlatives about the NZSO’s playing. How wrong I was.

The four movements are, as every child in the Michael Fowler Centre today now knows, linked by the voice of Scheherazade herself, telling the Sultan stories as best she can in order to save her life. Concertmaster Vesa-Matti Leppanen is a very fine violinist, and he played wonderfully well. The rest of the orchestra rose to meet him. From the very opening, the sound was huge and enveloping. My notes say things like ‘Tuba! Flutes! Vesa and harp! The waves rolling! Robert and Bridget!’ as though I was in such an advanced state of delight that I had lost most of my brains.  Quite true, of course.

New conducts in an expansive style with a detailed vocabulary of gestures. She is petite, and throws her whole body into it. Yet it is not showy; it is all in the service of drawing the music from the players.  Once or twice last night in Doctor Atomic I wondered what it is like for the orchestra, with so much information coming at them in every bar. Are they secretly longing for a straightforward downbeat (and leave the rest to us?). Whatever, it works. There was a crispness to the playing, with wonderfully tiered crescendos and decrescendos. Some of the pizzicato effects were extraordinary, like a ghostly wind; or the long held notes on the basses; and everywhere fast, tidy tempo changes, with the orchestra turning on a dime. So many gorgeous solos: from the harp (Carolyn Mills), first clarinet (Patrick Barry); first oboe (Robert Orr), first flute (Bridget Douglas); trombones (Dave Bremner), with a gorgeous unified string sound. There were moments when the lower strings provided a dark underlay to the solo above; a trombone and triangle duet; shot notes on improbable combinations of instruments such as triangle and tambourine. One of the crescendos in the fourth movement was so beautiful it bought tears to my cynical old eyes. And then a helter-skelter race to the finish, with some of the fastest tempi I have ever heard in this work. No one lost touch. Finally, it was back to Scheherazade, who comes to the end of her last story, with Vesa’s impossibly high, impossibly long last note. A dazzling and beautiful concert. Bravo!