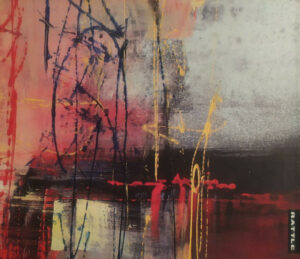 Both violinist Monique Lapins and pianist Jian Liu are well-known to me via various recent live concert experiences, though I’ve yet to see them perform together (my Middle C colleague Steven Sedley reviewed a St.Andrew’s Lunchtime Concert at which the pair performed Béla Bartók’s First Violin Sonata – https://middle-c.org/2021/05/monique-lapins-and-jian-liu-give-consummate-performances-of-bartok-and-debussy-at-st-andrews-of/). Rattle’s new CD devoted to Bartók’s works for violin and piano certainly whets the appetite for more from the pair! Backed by stunning visual presentation (the fantastical Bartók-inspired work of Austrian-born Canadian domiciled artist Ernestine Tahedl adorns the front cover and the booklet pages), everything about the production is so  attractively wrought and sonorously captured one can’t help but be drawn willingly into the music’s colour and excitement.

Bartók’s extensive researches in to and collecting of Hungarian folksongs strongly permeate both of the major works on this recording,  given that, at the time of their writing (1921-22) he was also expressing  interest in the Second Viennese School’s modernity and atonal explorations, along with the works of Debussy and Stravinsky. The folk-song element is evident at the opening of the First Sonata when the impressionistic whirlwind of piano tones introduces a folkish lament-like song from the violin.  An ebb and flow of exchange between the instruments dominates the first section, now forceful now rhapsodical, with the piano often set a-dancing by the violin’s roller-coasterings! The “great calm” that settles over the music’s central sequences is beautifully caught by the recording, the piano’s crystalline patternings augmented by the violin’s delicately-sculptured lines – all so haunting and magical, and gorgeously realised by both Lapins and Liu. Though interspersed with further trenchant violin lines and monumental piano tones, a sense of contained calm (with echoes of a “Dies Irae” chant!)  returns at the movement’s end.

The slow movement is begun raptly and wistfully by Lapins’ violin,  a gorgeous outpouring of tone, eventually joined by Liu’s piano – the plaintive and heartfelt exchanges bring to my mind the Debussy of Canope,, from his Book II Preludes,  the sounds suggestive of a deep yearning, so tender and inward. Distant gongs which sound mid-movement then build in weight and focus,  the rhapsodic mood gradually made excitable as the violin pours forth folk-like declamations, though the piano grounds the music once more, planting footprints in the music’s snow – we hear some ethereal high violin notes and responses of limpid beauty from the piano, before the enchantment of it all regretfully draws to an end.

The third movement is a foil to all of this, something of a madcap house,  not unlike the contrast between the second and third movements of Ravel’s G Major Piano Concerto – though Bartók’s differing moods in his finale are even more quixotic than Ravel’s! Wild, combatative chords from the piano issue a call to arms, a challenge taken up by the violin, its wild dance hotly pursued by the piano (lovely smoky, pesante-like tones from Lapins’ violin) resulting in a right old set-to between the instruments – extraordinary declamations, each blaming the other for the ruckus! – the instruments plunge into the “friss” again and again, but come to grief each time with different issues, one of them marked by almost grotesquely clumsy figurations from the piano, to which the violin cocquettishly responds, and another a sudden salon-like gesture of genteel insouciance – but both are whirled away once again by almost (at this stage) “silent-movie-galloping” sequences, with Lapins and Liu both on fire, the piano dancing and the violin rocketing up and down! – when, perhaps at the brink of exhaustion’s point,  a couple of mutually wrought, no-nonsense gestures conclude the mayhem!

The composer described the violin parts of both his two Violin Sonatas in a 1924 letter as “extraordinarily difficult…..it is only a violinist of the top class who has any chance of learning them” – though violinists “of the top class” may proliferate today, the difficulties of this music remain formidable, both technically and interpretatively. The Second Sonata has two movements, replicating the traditional “verbunkos” (translated as a “recruiting dance”), a sequence featuring a slow lassu introduction and a concluding friss. Lapins and Liu launch the work with expressive, long-breathed gestures right from the beginning, the opening folkish phrases beautifully sung by the violin and resonated by the piano, creating atmospheric and gorgeously-modulated sequences burgeoning with intent.  They “grow” the composer’s slow-motion intensities patiently, the playing by turns suggestive and full-throated, keeping the music’s exploratory musings and the folk-like figurations poised and expectant throughout as the movement comes to its tremulous conclusion.

As for the second movement, Lapins and Liu keep the listener virtually on the edge of the seat throughout the music’s brilliantly kaleidoscopic energies, beginning with portentous piano rhythms, brash string pizzicatos and impetuous running sequences, the exchanges growing wilder as the music develops. Along with an improvisatory kind of feeling – the music lurches from quiet and brooding to raucous and energetic almost without warning throughout – there’s a strong sense of striving towards somewhere the music might call home, expressed most convincingly in the folk-like themes that recurs on each instrument by turns throughout, a lyrical fragment of which eventually calls the work to rest. But along the way one relishes some familiar Bartókian gestures, such as the “tipsy” sequences mid-movement, during which one can almost smell the wine on the music’s breath; and the suggestions of “night-music” in places, though more hinted at than actual in such capricious music as here.  Elsewhere, the quicksilver volatility of these players’  exchanges and responses to the music are remarkable, from the brooding expectancies to the more trenchant, full-on engagements, the music seeming to reach out and summon the questing, exhausted spirit home at the end….

I enjoyed comparing Lapins’ and Lui’s playing with that on another New-Zealand-made recording of the same sonata, that by violinist Justine Cormack and pianist Sarah Watkins on the Atoll label (ACD 101) coupled with sonatas by Debussy and Janacek. I thought Cormack and Watkins found more light and shade in the work’s various sequences, their lighter touch enabling a quicker tempo for the first movement and lighter textures in places in the second. Having said that one couldn’t possibly nominate a preference for one performance or the other based on anything except raw feeling – suffice to say that I felt the Bartók performance by each duo was engagingly of a piece in style and intent with their presentations of the other music on their recordings.

It was a good idea for Lapins and Liu to present each Sonata with a kind of “makeweight” top provide some “breathing-space” for the listener in the wake of such intensities! – thus after the First Sonata we hear a set of “Romanian Folk Dances” which first appeared as a piano solo, but has since been arranged for various instruments as well as in an orchestral version by the composer – Bartók’s friend Zoltan Szekely made this particular arrangement. I first heard this music in its solo piano form on my very first Bartók LP featuring the pianist Gyorgy Sandor – on the sleeve of that disc the LP’s contents were described as  “A timid soul’s approach to….” (in small lettering) “BARTÓK” (in big print)! With works like the “Out of Doors” Suite and the ”Allegro Barbaro” on the disc, it was all an exhilarating experience,  here replicated for me by Monique Lapins and Jian Liu but without a trace of timidity!

After the Second Sonata the disc concludes with another arrangement, that of a Sonatina for solo piano SZ55, originally titled Sonatina on Romanian Folk Tunes when written in 1915 by Bartok, and subsequently reset for violin and piano by violinist Andre Gertler, who frequently performed with the composer. Lapins and Liu give these pieces all the fun and directness one imagines first attracted the composer to the “original” melodies. I felt sorry for the poor captive bear, in the middle “Medvetanc” (Bear Dance), but the concluding Allegro vivace restored my jolly listening mood. Throughout, as with the rest of the disc, I was lost in admiration at the players’ ability to adapt their style to the material, these dance-like items for me as warmly spontaneous and fun-loving to listen to as the performances of the two Sonatas were gripping and profound.